Cape Town in South Africa. That was the first word with which we woke up this morning and that is that although there are still a few hours left, today is the day on which we will start one of the most anticipated trips of the year, the one that will take us to know South Africa on our own.

For many free trips, the flights we take are usually in the morning or at most in the early afternoon, so today, having the flight from Barcelona to Cape Town in South Africa with Iberia at 9:30 p.m. We have to confess that the day is quite long, although we take the opportunity to finish leaving work for the day in addition to packing, that with the hustle and bustle of the last few days, we were not finished yet.

Spend a few minutes at 5 in the afternoon when we leave Lloret de Mar towards the Barcelona airport, where we arrive almost at 7 in the afternoon and where after leaving the car in the parking lot, we go directly to the Iberia counter where we check in our bags for the flight to South Africa, we pass the security controls and wait, coffee in hand, the moment of boarding with which we will begin this incredible trip to South Africa in 25 days. 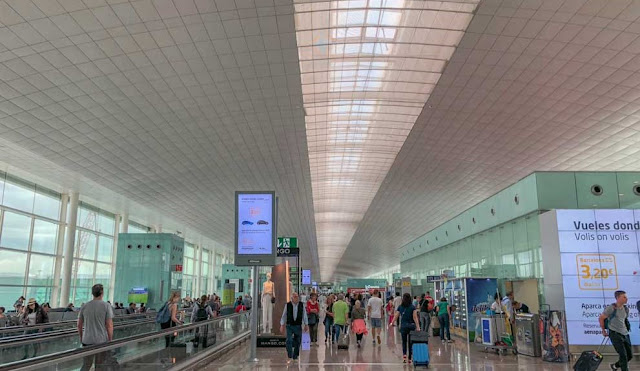 Flights to South Africa with a stopover within the country

Something very important to keep in mind when you fly to South Africa is that if your flight stops within the same country, as we do when we fly to Cape Town with the first stop in Madrid and a second in Johannesburg, it is in the first place you make a stopover within South Africa, you must pass passport control, collect your luggage and put it back on specific luggage belts for transits.The process is very simple and fast, but it must be taken into account to avoid later problems with your luggage. 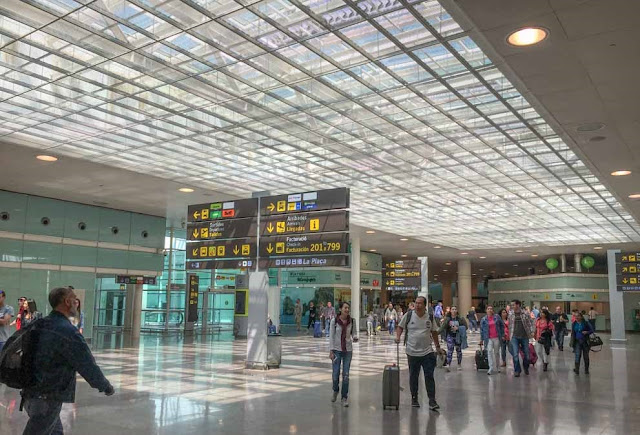 After a while with nerves on the surface, it is time to board, settle into our seats, which we have to confess are much better than we expected, and enjoy a flight that between movies, reading, and itinerary reviews, is it happens much faster than expected.

We arrive in Madrid, the first stopover of the flight when it is practically 10:30 p.m. and the first thing we find is that this airport is much more intuitive than we expected in addition to having much more pleasant facilities.We also see that the restaurant options are of higher quality than those in Barcelona, ​​so we take the opportunity to make a quick dinner that includes a couple of ham sandwiches, drinks, and coffees for 20 euros, which we have to say, we are very surprised by the quality, something that has happened with the Iberia flight we did not expect at all. 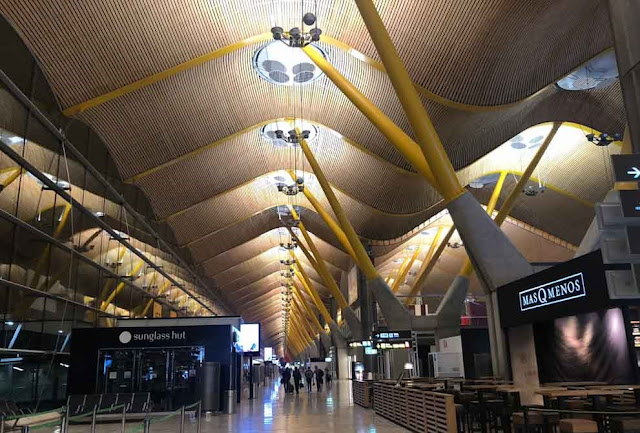 And so, when there are a few minutes to 12 at night, we start boarding what will be the second flight of the day, which will take us to Johannesburg first, where we will make a stopover, and then finally enter Cape Town in South Africa, which will be the place where we start the route of this journey.

It is time to settle in and enjoy the 11 hours of flight, which we spend practically entirely sleeping, something that will allow us to start the trip in the best possible way and full of energy.

After a much more comfortable flight than we expected, we arrive in Johannesburg at 10 in the morning and the first thing we do is go through customs controls, as we were told at the check-in at the Barcelona airport and that We explained previously due to the country’s regulations, which oblige you to collect your luggage at the first stopover point you make in the country

Even if you have a short stopover, don’t worry, South African passport control is usually quite full, but access for visa-free entries and for the rest of the world’s passports almost always goes very fast, so this procedure does not it will take more than a few minutes.Once you have the stamp in your passport, something that will also allow you to go faster in Cape Town in South Africa, since you will have done the procedure, you will access the luggage belts, where you must collect your luggage and go directly to another belt that It is a pre-check-in, where you must leave your luggage so that it can go to the plane of your domestic flight. 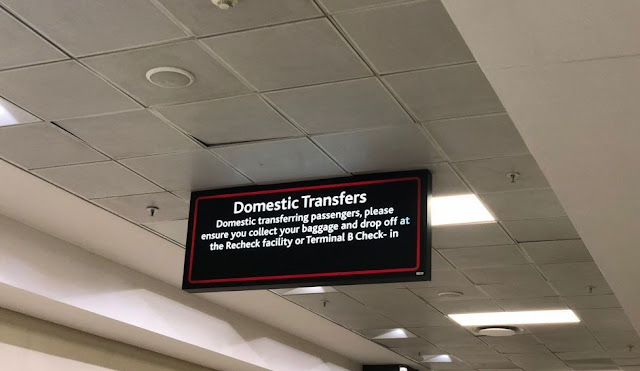 At this point, it is necessary to make sure that your luggage is properly checked from the point of origin. For example, in Barcelona, they already told us what we should do with the luggage and they documented it for us to Cape Town so that we only had to make that change of tapes and not have to check it in again.

Once you have your luggage you will have to pass a security arch and go to the domestic flight transit terminal where you will see that there is another baggage belt in which Recheck is indicated. 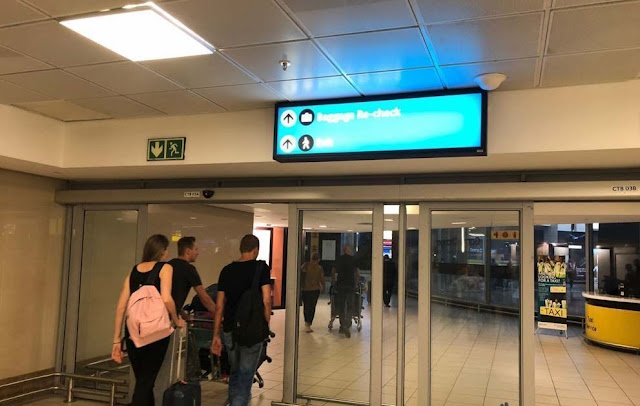 Once all this process is done, we go directly to the terminal from which our flight to Cape Town in South Africa departs, which has boarding time at 12:10 in the morning and will finally take us to our destination and to the beginning of this we intuit, incredible trip.

Seeing that with the 2 hours we had of connection we have done all the procedures and we still have practically an hour left, we took the opportunity to go to a Vodacom store where we bought a couple of SIM cards to be able to be connected throughout the trip to South Africa.

Keep in mind that in South Africa there are several companies that offer free SIM cards to connect to the internet or call in the country.In our case, we have opted for Vodacom, which is the one that offers the best coverage in the country, including many of the Kruger Park areas.Although you will find stores in the cities of Johannesburg and Cape Town, as well as in the main areas of South Africa, we advise you to buy it directly at the airport, since here they are very used to this process and will provide you with all the data in addition to activating them. themselves. 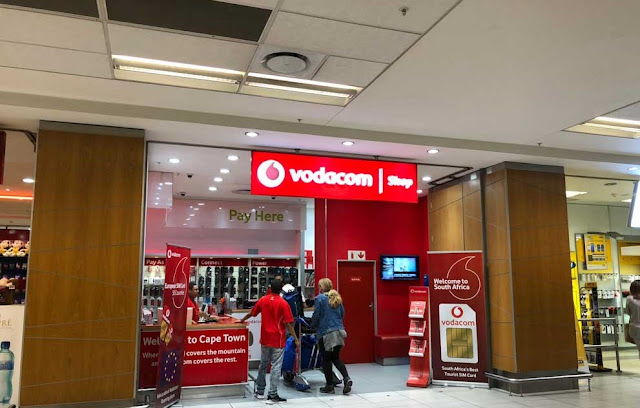 Vodacom has countless plans, depending on the data you need and the days you are going to use it. We choose the 20Gb one for 30 days for R1010 and the 10Gb one, also for one month, for R605.As we mentioned before, the process is very fast, it has not taken us more than 5 minutes and you can also pay with Visa or MasterCard 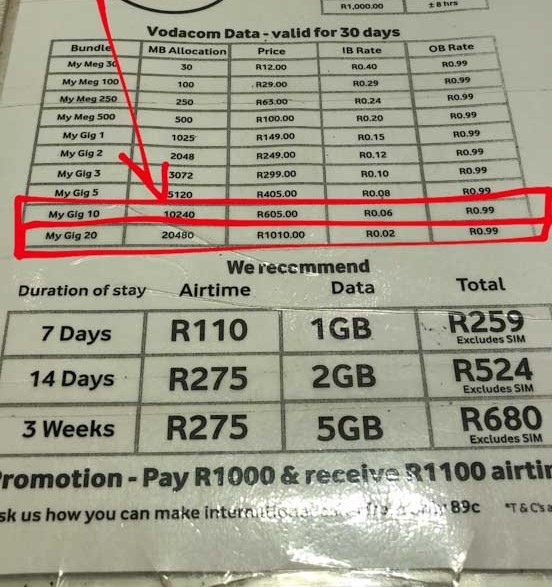 Another option is to choose to buy a Holafly SIM card while in Spain, with which you will have internet from the moment you land, saving you all the time of the procedures and making the whole process to have internet in South Africa much more comfortable, quick and easy.In this case, with the Holafly SIM, you will have several Gb to surf the Internet (depending on the option you choose), they will send it to you for free, you will keep your WhatsApp number and you will have assistance service in Spanish.

Keep in mind that this day that we are relating in this post would already belong to the next day of the trip, but we wanted to include the issue of transit in South Africa and the purchase of the SIM card so that you take it into account in this first part of the trip to In the next post, we will focus on the car rental process in South Africa, with which we will continue this practical guide.

And so, after all the procedures, on-time we embark on what will be the third flight of the day with which we will finally arrive in Cape Town in South Africa, the city that will be the gateway for a trip, which we are sure, it will end up being one of the most incredible destinations in the world. 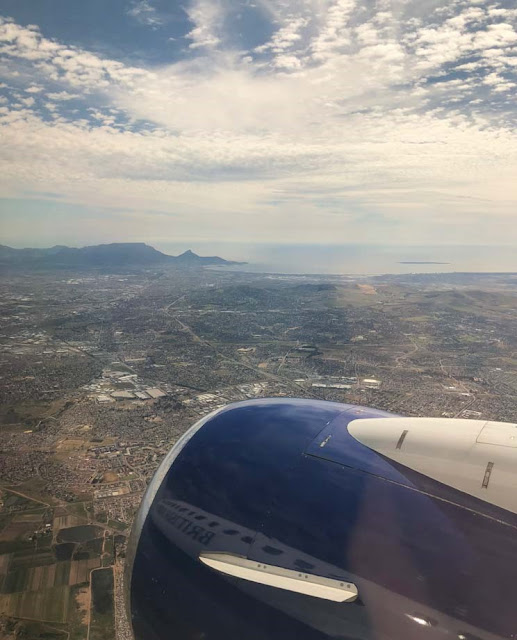 My 20 days trip to South Africa.

Renting a car in South Africa,

How to go from Swaziland to the Kruger

Hlane Park, one of the places to see in Swaziland

What to see in Isimangaliso

Go to the Arqam options page to set your social accounts.