We started the Cape Town route in 2 days with great news and that is that the Table Mountain funicular is finally operational, a visit that we had planned for the Cape Town route in one day but in the end, we had to postpone due to It was very windy and the funicular was inoperative.
So with this great news, with which we confirm that we will finally be able to visit Table Mountain, one of the essential places to see in Cape Town, after a couple of hours of work, when it is 7 in the morning we go down to the living room breakfast at the Circa Luxury Apartment Hotel, our accommodation in Cape Town these days, stops at 8 o’clock to catch the rental car in South Africa and travel the 6 kilometers that separate us from the Table Mountain funicular station.

Despite the fact that they open at 8:30 in the morning at this time of year, we get the big surprise when we see that there is already a kilometer queue, even in the line of travelers with tickets already bought and the parking is full, so that we have to park practically halfway, on the shoulder, as all the cars that are arriving at this time are already doing.
Bearing this in mind, we recommend that you arrive before 8 in the morning, especially if the funicular has been closed for several days so that you don’t have to queue so much. 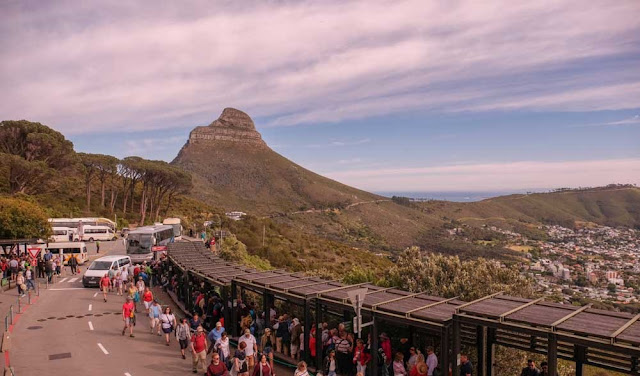 The queue at Table Mountain

Seeing what awaits us at this point on the route through Cape Town in 2 days, we relax and take advantage of the hour in line to have a coffee and review the planning of the next days of the trip to South Africa in 25 days, in which We will start the route itself and we will begin to visit places where animals will be the real protagonists.

Table Mountain, one of the places that you cannot miss on the route through Cape Town in 2 days

Considered the most famous mountain in Cape Town, visible from practically anywhere in the city and which gives its name to the Table Mountain National Park to which it belongs, this is a must-see, weather permitting, in the city.
With a very appropriate name, since its shape resembles a table, with an altitude of 1000 meters and a plain that can be crossed on foot through several trails, it has a really impressive relief, which has made it one of the symbols of the city.
Formed more than 500 million years ago, Table Mountain is always amazing, although the days when the clouds are low and seem to create a blanket under the plain are especially striking and truly magnificent.

To go up to the area known as the plain, where you can walk, you can choose two ways: 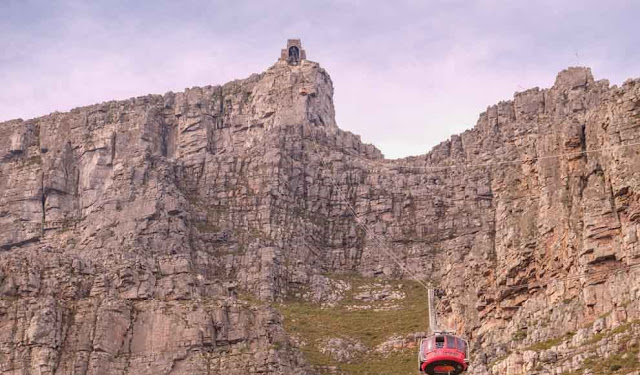 Things to do in Table Mountain

Once you are at the top of Table Mountain, we recommend that you take some time to look at the trails that there are, there are not many and start walking them.
Keep in mind that most visitors stay in the initial part, where the viewpoints with the best views are, so we advise you to do these but then continue walking to be able to enjoy Table Mountain for yourself. 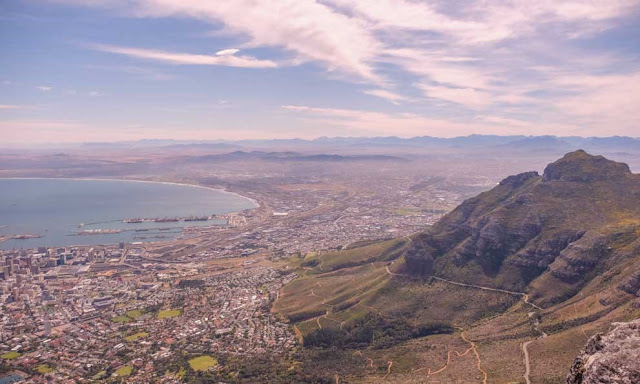 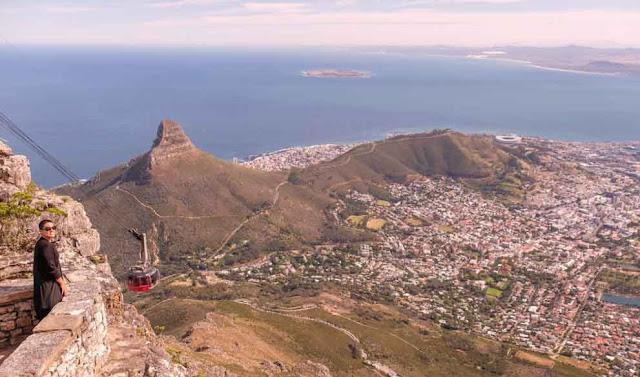 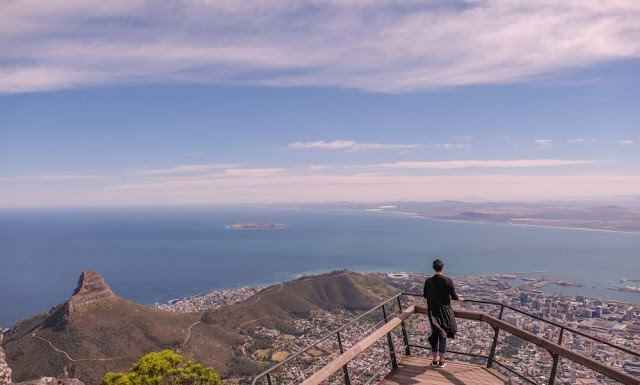 This is where the 3 most incredible viewpoints of Table Mountain are located, which you cannot miss on the route through Cape Town in 2 days. 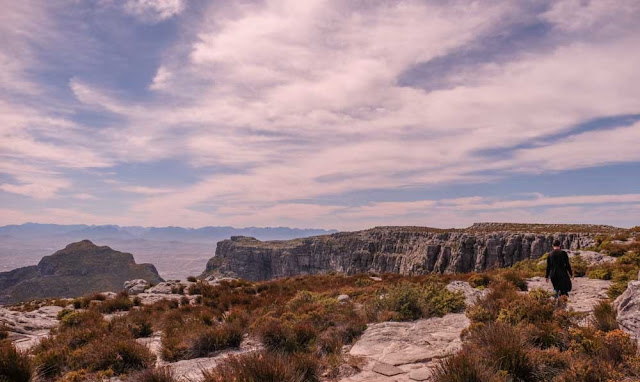 If you have time, we recommend you do the 3 trails. It will not take you more than 2 hours with stops included, to have a vision of the entire Table Mountain, which we assure you, will be one of the most incredible places in South Africa for free. 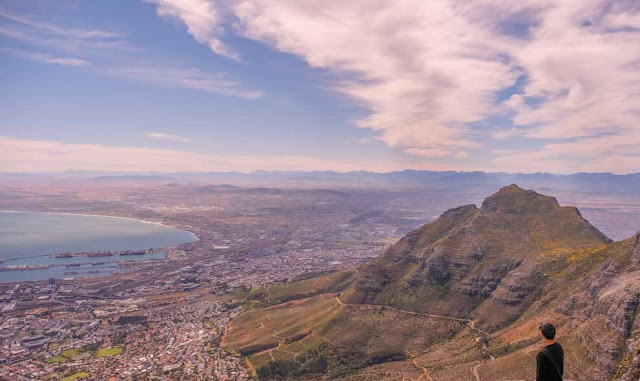 Table Mountain, an essential in a route through Cape Town in 2 days

After practically 2 hours in Table Mountain, when it is 11 a.m. and after doing the three trails that have taken us to all corners of the plateau, we return to the funicular, to meet at this moment with the famous dassies, some small rodents very similar to the typical guinea pigs of this place and start the descent of one of the most beautiful places we have seen so far. 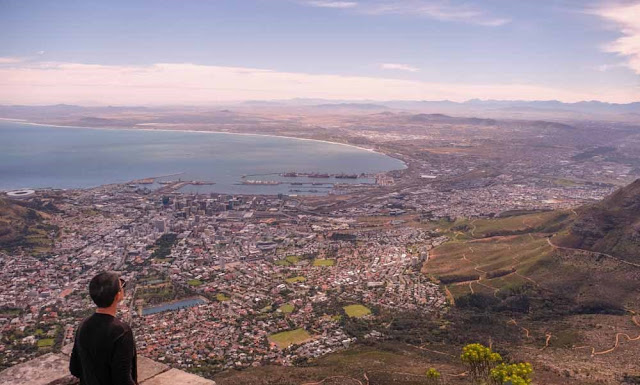 Although we have only seen Lion’s Head from the perspective of Signal Hill on the first day on the Cape Town route in a day and today from Table Mountain, we want to comment that there are many travelers who recommended us to climb, something that is You can do it even if the weather is bad, since the path is entirely on foot.
That said, after taking a good look at it, we saw that the ascent is approximately 2 hours and there are several difficult areas where you practically have to climb between rocks, so we ended up discarding it.

Although we have only seen Lion’s Head from the perspective of Signal Hill on the first day on the Cape Town route in a day and today from Table Mountain, we want to comment that there are many travelers who recommended us to climb, something that is You can do it even if the weather is bad, since the path is entirely on foot.

That said, after taking a good look at it, we saw that the ascent is approximately 2 hours and there are several difficult areas where you practically have to climb between rocks, so we ended up discarding it. 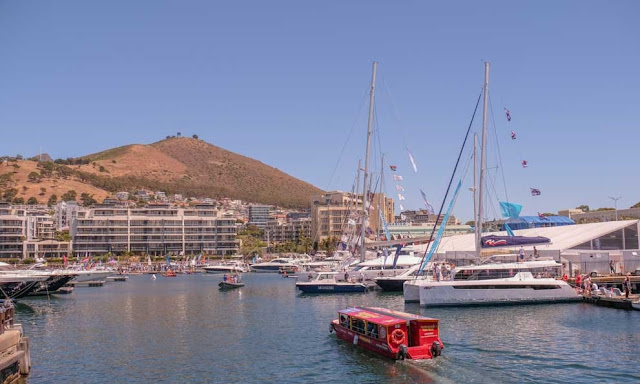 After different renovations and restorations, this area of ​​Cape Town in a few years has become one of the fashionable places of the city, in which a neighborhood has been established, very safe, and frequented especially on weekends by people looking to have fun and spend time away from the city.
This leisure area, which features bars, restaurants, shopping centers, and even a museum, considered the largest museum of contemporary art in Africa, is said to be a space for people of all social classes and colors. 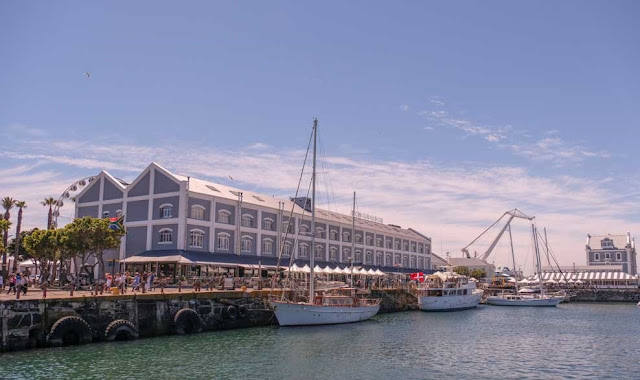 Although we did not stay more than a few hours and it is very easy to speak from this point of view, our perception was totally different and that is that both 99% of restaurants and shops are totally focused on an upper-middle-class of society that unfortunately, it does not include the majority of the black population. 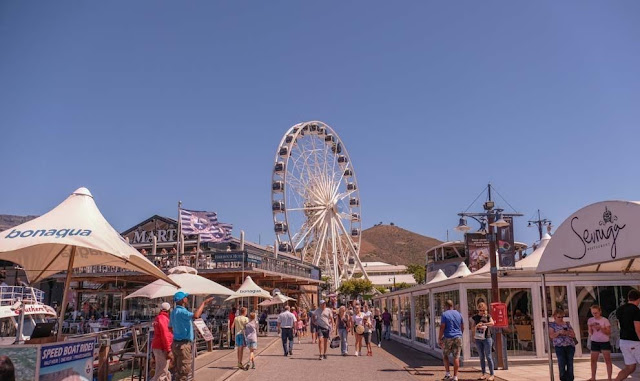 That said, at least for us this place is curious to see, but not for more than a couple of hours, which we would take advantage of to link with the visit to Robben Island since the ferries to the island leave from one of the docks of the Waterfront and it can be a good complement to the Cape Town tour in 2 days.

Taking into account that Cape Town in 2 days continues with the ferry to Robben Island and we have it at 3 in the afternoon we decided to go to one of the most recommended restaurants in the area, Willoughby & Co , specialists in sushi, where After waiting a few minutes for a table, we asked for three varieties of rolls plus water for R576, plus a 10% tip, something that must be taken into account in South African restaurants, since although it is not included in the ticket, it is practically mandatory, as in the US, to leave it.

It is 2:30 in the afternoon when we continue with Cape Town in 2 days approaching the Nelson Mandela Gateway at the V & A Waterfront, which is near the Clock Tower, from where the ferries leave, to wait for the time of the Boarding that will take us to one of the places we most wanted to know on this trip. 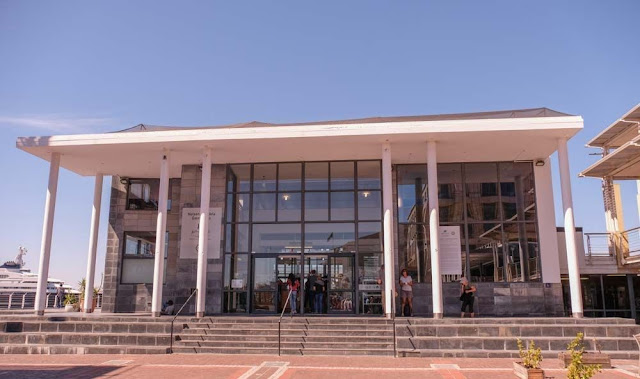 We can say that this small island-prison is one of the most famous next to Alcatraz in San Francisco because it was here that Mandela stayed for 18 of the 27 years that he was in prison.
Used by the first settlers as a prison, this piece of land was also an asylum and a leper colony and later, during apartheid, it became a prison again, in which living conditions were terribly harsh.

Please note that the visit to Robben Island can only be done in a guided way and you must arrive by ferry from the Waterfront area in Cape Town.
You can buy tickets through the website, in case the ferry is canceled due to bad weather you can change it to the day as long as there are places, reserve the tickets for the ferry and hotel pick-up, or this combined Cape Town Tour and Robben Island.

It is important to know that this is a tour that usually sells out very quickly, so it is important and highly recommended to book it in advance so as not to run out of places and above all, to be able to organize your routes, as we did for Cape Town in 2 days. 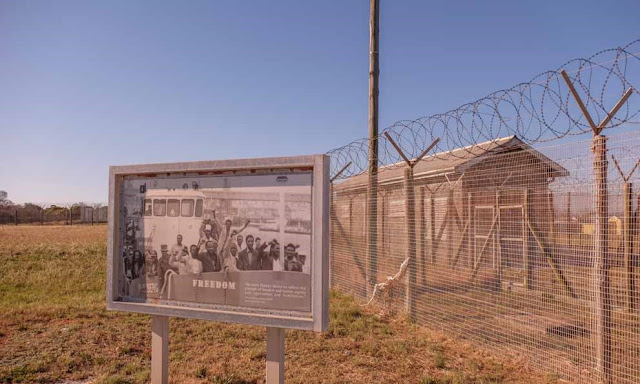 The visit to the island consists of three different parts, which can be done in different orders depending on the schedule you have taken or the group you are in. 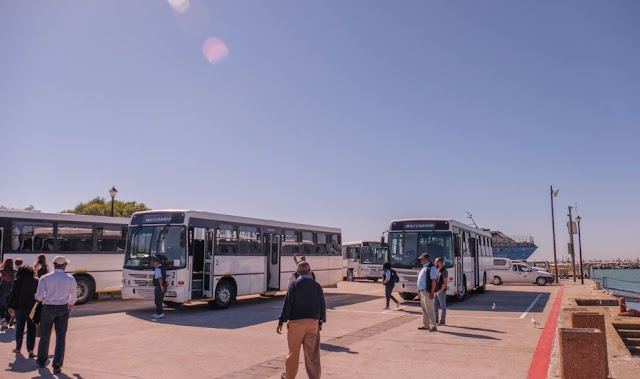 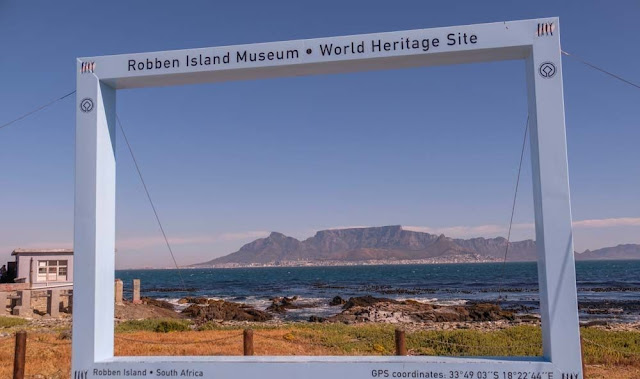 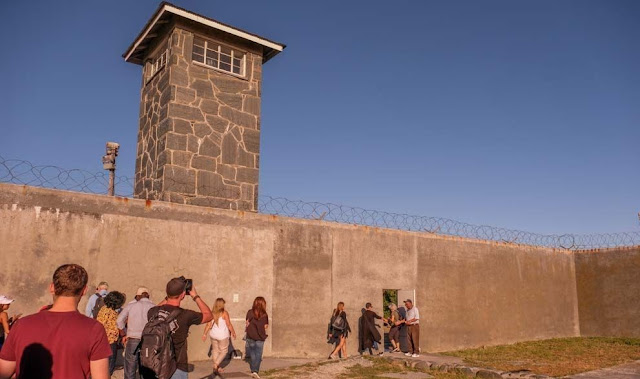 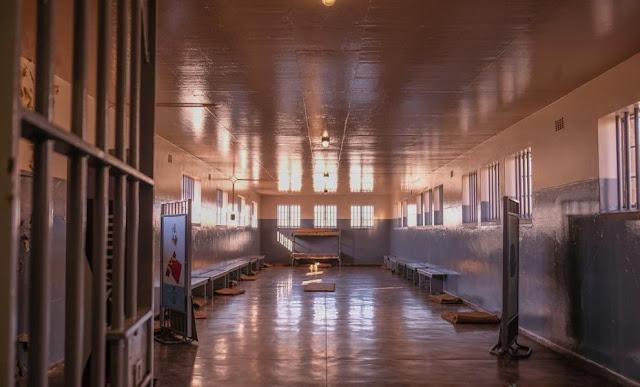 We finish the visit to Robben Island when it is 6:30 in the afternoon going directly, this time walking and as the guide tells us, following the steps that the prisoners followed when they were released, back to the ferry, after 30 minutes and beautiful views of Cape Town with Table Mountain on the horizon, arriving again at the Waterfront, where today we finish the route through Cape Town in two days. 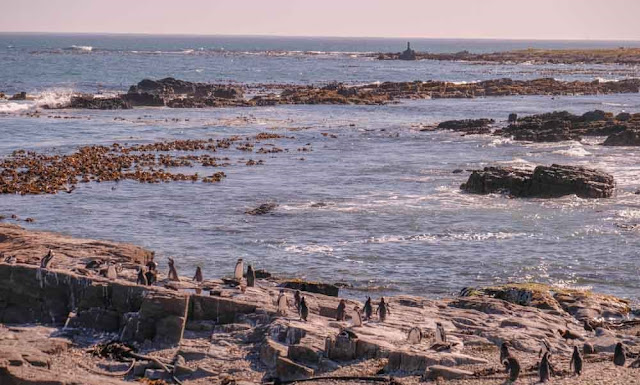 And although we are honestly not very hungry, we decided to go to one of the restaurants that we have seen are more recommended in the city, which is none other than Col’Cacchio, where we order a couple of pizzas, water, and beer for R343 with which we say goodbye to this incredible city that we can say, it has been the perfect gateway to this trip to South Africa and the gastronomic end of today’s route through Cape Town in 2 days.

Map of the route through Cape Town in 2 days

Today’s tour of Cape Town in 2 days has taken us to see Table Mountain, Waterfront and Robben Island, three of the most incredible places in the city.

What to see in the Cape Peninsula

How to go from Swaziland to the Kruger

Hlane Park, one of the places to see in Swaziland

What to see in Isimangaliso

Go to the Arqam options page to set your social accounts.